Skip to content
HomeNEWSEV to Edinburgh, take two: 700 miles in a Kia E-Niro

One year on from taking Hyundai’s then-new Kona EV on a cross-country road trip, we do the same in its sister car to see how the network has improved

Just over a year ago I set off on a bleak December morning from Oxfordshire to Edinburgh in a 64kWh Hyundai Kona EV SE. The idea was to take the first affordable EV with a decent range (£35,145 after PiCG at the time) and get there without having to jump through any early adopter-type hoops. It’s not a once every six months trip either, it’s one I do a few times a year.

The Kona Electric was easily up to it and would have managed it with two rapid charges each way (which take the battery to 80 percent in rapid mode, rather than 100). It was a near disaster because six of the eight Ecotricity DC rapid chargers I stopped at during the entire 690 mile round trip, didn’t work.

In January, I did the trip again to see if anything had changed apart from the car, which this time was a Kia e-Niro with the same size battery as the Kona. As before, I’d got an idea of which services I needed to stop at from Zapmap and the Ecotricity Electric Highway apps. I also made a note of Polar chargers near the motorway just in case I ran into trouble with Ecotricity again. This time my other half was with me, plus a puppy and I couldn’t risk getting stuck in the cold weather.

We left with the trip on 11,834 miles and a 24 hour charge from a domestic socket, a predicted range of 233 miles and the temperature outside, a nippy 6°C. I’d found with the Kona that the predicted range never quite lived up to the promise and I’d end up at a charge point with less remaining range than expected. I put it down to the fact I was doing a steady 70mph on the motorway but a delivery driver told me recently he found that generally, EVs range predictions were optimistic at around 1.2 miles for every mile actually travelled.

The first stop was 118 miles away at Knutsford on the M6 with the temperature still at a chilly 6°C. The remaining range on the trip computer was 133 miles, a difference from the predicted range of 115 miles which tallied almost exactly with reality. I’d made good use of the adaptive cruise and the Ecotricity charger worked, delivering 24.1 KWh for £7.23, 30p/kW in around 45 minutes and with the range now topped-up to 204 miles. 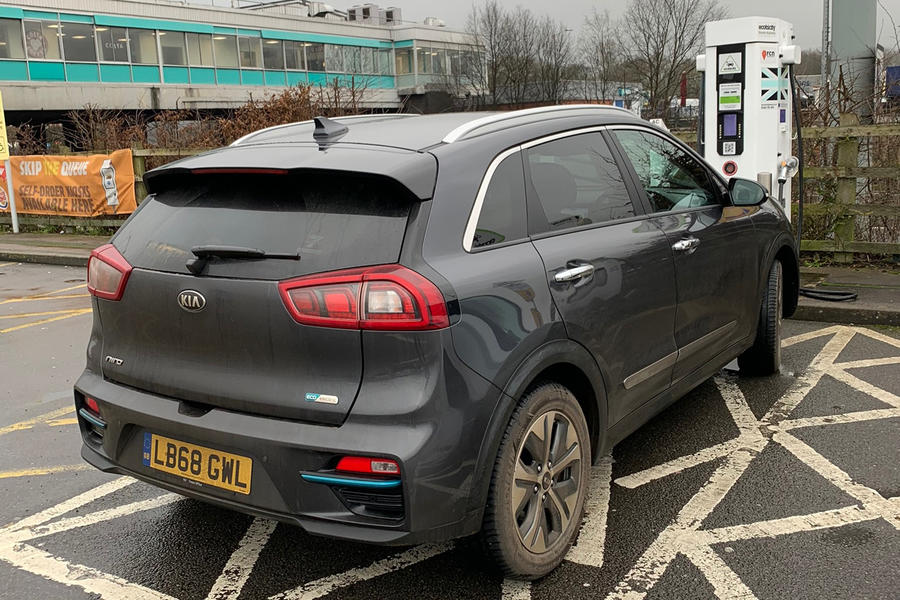 Next stop was at the usual – Tebay Northbound. This time the numbers suggested the e-Niro was being slightly pessimistic, so we’d used less energy than it anticipated and were left with 199 miles. Again, straightforward charge with Ecotricity costing £7.80. We stopped again at Abington services on the M74 before heading off across the borders to Edinburgh, not because we needed to but because I wanted plenty left for the return trip across the borders. Accessible rapid chargers are extremely scarce at our destination, the pup needed a pee-stop anyway and the charger at Abington was on free vend, so we took 25.2kWh while we were at it. We arrived on the outskirts of Edinburgh with 150 miles range left, so two stops would still have been comfortable.

On the way home on the third day of the trip, it was much the same story except this time I was confident with Ecotricity and completely confident with the Kia’s range predictions. After a domestic socket top-up while we were there, we left for home with the range showing 240 miles. We stopped at Gretna after 87 miles for breakfast but didn’t bother charging, then Lancaster after another 84 miles with another top-up, then Keele and another top-up) after a further 74 miles then home, 91 miles away.

The total trip was 709 miles and we finished with a predicted range at the finish of 77 miles. Several of the stops were for us and the pup rather than the need to take on charge, but I also wanted to check whether the chargers were working. The adaptive cruise, active lane keeping and refinement of the e-Niro made it the most relaxing trip I’ve done to Scotland over the last few years and this time the Ecotricity chargers all did the job without a fight. In total we spent £42.60 on rapid charging and probably around £10 on home charging at both ends at about 15p/kWh. Say £45 energy cost, compared to around £85 in the family Fiesta 1.0-litre Ecoboost and around £130 in my 3.0-litre X5 diesel.

Of the three, the e-Niro was by far the most enjoyable to do the trip in and I’d started doing the man maths to buy one before we’d finished the first leg. But even set at maximum denial levels, my man maths faltered at the cost of buying an EV like this. It’s still so much more than a conventional equivalent even with the PiCG. In this case, the e-Niro (which only comes in the highest Niro 4 trim level at £34,495) is £4,940 more than the petrol hybrid version and almost £10,000 more than a Niro 2 trim hybrid at £24,885, including the £5,000 PiCG against the EV.

On the Kia website you are invited to ‘join the reservation list,’ so the chances of a deal are just about zero. In contrast there are deals out there for the Niro mild hybrid and for the new Ford Puma, which in fully loaded First Edition Titanium mild hybrid spec, can be had for significantly less than the £28,145 ticket price if you shop around. With PCP, that makes a big difference to the monthly payments. 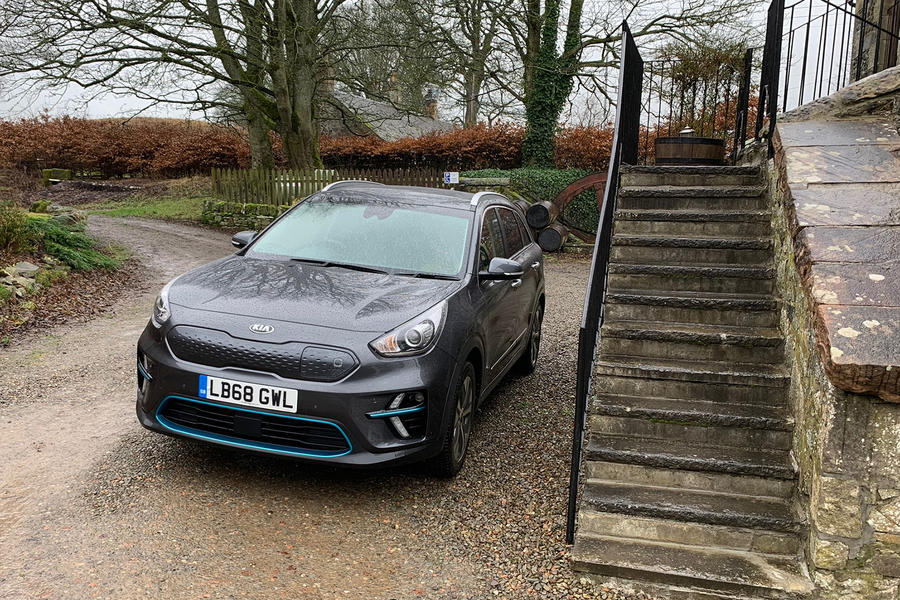 The Kia handles well, rides well and has mighty acceleration for overtaking (and fun) when you want, even at higher speeds. Regenerative braking is adjustable using steering column paddles so the accelerator effectively becomes the brake as well if you crank it up. It cuts down the reaction time which I find gives better control driving cross-country, especially on the dark on unlit roads. I was surprised at how I could adapt my driving to take advantage of the EV’s characteristics and how much fun it was.

Is the e-Niro a convincing substitute for a combustion engine equivalent over any distance? For desirability, running cost and capability the answer is a definite yes. Despite being a lifelong petrolhead, I’d take one in a heartbeat over any petrol or diesel equivalent, but not until the price is a lot closer than it is today.

Kona to Edinburgh: 700 miles in Hyundai’s new EV for the masses

Analysis: Who will charge our electric vehicles?